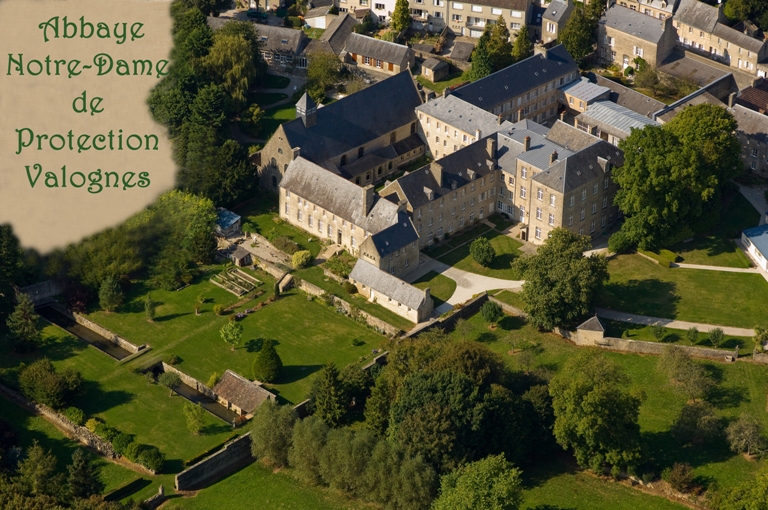 Founded in 1623 in Cherbourg, the community, hit by an epidemic of plague, fell back to Valognes as soon as 1626. A monastery is built, from which the nuns were expelled by the French revolution. Most of the nuns, including the abbess, end up in Jail. Released but forced to hide, several continued, without interruption, to live a monastic life. In 1810 they buy the convent of the Capuchins which were forced to exile. At the beginning of the 20th century, new threats of eviction : They prepare to refuge themselves in Guernesey. 1940 : The monastery is occupied by German troops before being bombed, as the whole of Normandy was in 1944. Sisters from Dourgne will come to help recover the old monastery.

After so many events which should have destroyed it, the Abbey of Notre-Dame de Protection at Valognes took off again, by the grace of God and the courage of the nuns, breath and vitality. Soon the Community engages into the reforms requested by the Council Vatican 2 and creates, 50 years ago a monastery in Koubri (Burkina-Faso). Days are given rhythm, by the celebration of the mass, the lectio divina, the personal prayer, and the work which provide the community with necessary resources (Mass bread, manufacturing of fruit jellies) and the reception of the hosts in accordance with the benedictine tradition.

The community to day counts 25 sisters and wants to be open to the welcome, reception, to exchanges which enrich our vision of the church and of the world, feed our prayers: Relations with the diocesan church, ecumenical relations, dialog with our Jewish brothers and sisters.