Carmel : its origins,   its figures

VIII century BC,
on Mount Carmel :

The Prophet Elijah rises like fire : “Living is the Lord before whom I stand”. “I am filled with zeal for God, the Lord” 1 Kings 17-21.

In the land of Israel, withdrawn in prayer, rises Elijah the prophet. Carmel, had drawn its inspiration from him all throughout time, in his search for the face of God, his fervent prophetic zeal, witness of the living God. Later on, many people who prayed in memory of Elijah made the deserts of Palestine bloom.

In the Middle Ages

On the slopes and in the caves of Mount Carmel are settled Latin hermits. Under the protection of the Blessed Mother, close to a small church (photo : ruins of this church) which is dedicated to her, hermits multiply.

Around 1209, Albert, patriarch of Jerusalem, gives them a “rule of life” nourished by biblical sap and the experience of the first monks. Thus, is born the Order of the Blessed Virgin Mary of Mount Carmel.

Around the end of the XIII century

Driven out of the Holy Land by the Sarasins, the hermits flee to Europe where they strive to live their charism in a setting totally different from theirs. Women moved by the same inspiration, living in Communities known as “the beguinages”, soon join them in their life of prayer, in particular in the Netherlands. Jean Soreth, General Prior of Carmelite Friars, reformer of the male Carmel, soon organizes them canonically in communities of Carmelites ; along with Francoise d’Ambroise (1427-1485), he founds the first Carmel monastery for women in Vannes, Brittany.

In the XVI century, in Spain 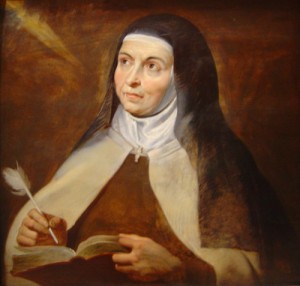 In a world and a church in full turmoil ; the conquest of the “new world”, the development of the printing press, the discoveries of Copernicus, the protestant reform, the council of Trent, the renewal of religious life, and the hardening of the Inquisition…

1535 – Teresa of Ahumeda enters the Carmel of the Incarnation in Avila. But the deep desire for a life more radically given to Christ in prayer is burning within her. “He is the faithful friend… look for his company… turn your eyes towards Him… what I am asking of you, is to look at him”. She wants to find the earlier sap of Carmel, the sense of the absolute of prophet Elijah : Turn your eyes towards the race of holy prophets from whom we descend. The 24 of August 1562, she founds in Avila the little Carmel of San Jose, the first of the Teresian Reform. 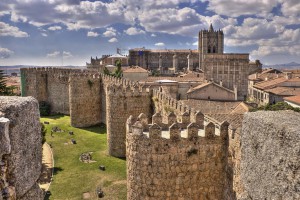 The universe is narrow, but the horizons are large and open to the world : the Church and its unity, the priests, the mission. This is why you are gathered here… here is the object of your desires, the goal of your prayers…

She gives to Carmel a new face : two hours of mental prayer (silent prayer) each day : we are called to mental prayer and to contemplation. Fraternal life in small communities, joyful and simple, apostolic and ecclesial orientation : the world is on fire, it is not the time to tackle matters of little importance with God.
The Marian imprint is most particularly given to mental prayer and contemplation, for in Carmel, being entirely Marian, one likes to contemplate Mary in silence, reflecting on all things in her heart... Regina coeli… Queen and Beauty of Carmel… Our mother and our sister…

1567 – Therese meets Br. John of St Mathias, the future St John of the Cross. This was a decisive meeting for the Reform of the branches of men and women “the discalced Carmelites”. Both branches launched the foundations of the Order, Paul VI. Through his writings, John of the Cross guides the soul through “the dark night” of Faith, up to the transforming union in God. He who is the center of the soul… pure contemplation consists in receiving.
The communities of the Teresian Carmel will rapidly spread throughout Spain, Europe, and the whole world.

Therese Martin hears the call to follow Jesus alone. At the age of fifteen, she enters the Carmel of Lisieux, this desert where God wanted me to go and hide. Within the Word of God scrutinized and prayed, she discovers the mystery of evangelical childhood. To Love Jesus, have him loved, she runs in her little way of simple and loving confidence. She wants to be Love in the heart of the Church, in accepting her weakness and blind Hope in the Mercy of God. Attacked by tuberculosis, the soul invaded by the thickest darkness, she surrenders herself by offering it all for the Church and sinners, her brothers.

One year after her death, her Story of the Soul crosses the borders, reviving hope in the four corners of the earth : I feel that my mission will soon begin, my mission to have God loved as I love him.

Elisabeth Catez, daughter of an Officer, passionate temperament, generous and righteous nature, she will learn how to conquer her terrible character for the love of Jesus. A warm friend and an accomplished pianist, she gives up everything to enter the Carmel of Dijon at the age of twenty one. Her new name enchants her : Elisabeth of the Trinity. She gives herself up without any reservation to Christ, whom she encountered in the deepest part of her heart.

She shares the marvelous discovery : all called, loved, possessed by the presence of God all love. Consumed by Addison’s disease, she bears the sufferings with serenity in order to be identified with Christ crucified. She is a shining witness for the joy of being rooted and founded in love. She invites us to discover for ourselves the beautiful sun in Christ radiating in our life.

Edith Stein, a Jewish German Philosopher. In her youth days her thirst for truth was her only prayer. Having become Christian at the age of thirty, she discovers her profound vocation : Standing before God for everybody. Teacher, translator, speaker, she witnesses of her faith before all. In 1933, she enters the Carmel of Cologne, whereas little by little the nazi threat is spreading all over Europe. The grip tightens up around the Jews. Teresa Benedicta of the Cross enters into the Science of the Cross in the pursuit of Christ. 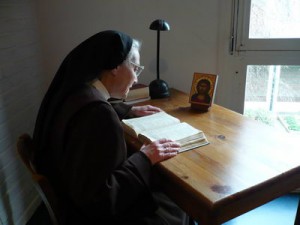 Deported, she dies in Auschwitz on the 9 of August 1942, in solidarity with her people, offering her life for all, victims and torturers, interceding for a future of peace. Pope Jean Paul II proclaims her co-patroness of Europe. Her philosophical and spiritual research sheds light on present time questions ; on the human person, the meaning of education, of the State, the specific role of the woman, the Jewish roots of Christianity, the individual and the State, the Judeo-Christian dialogue…

In the spirit instilled by the Madre, Carmel continues its mission : a life of friendship with the Lord, fraternal life or in solitude, missionary life under many aspects, prayer, hidden work, silence… These are the essential realities.