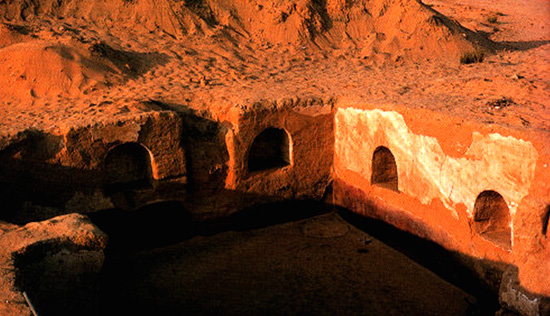 Who are these men and women, these “mothers” and “fathers” of the desert, apart from the world, who set off one day in search of God ?

We must look to the first three centuries of the Christian era. Throughout the Middle East and around the Mediterranean basin, a form of life developed itself in Christianity, characterized by a certain withdrawal from society, celibacy, asceticism, solitude, and frequent meditation upon the Word of God.

This movement, predominantly feminine in the West, came to be known as monachism (from the Greek : monos, monachos, monk).

This kind of retreat from society is not proper to Christianity. It is found in other religions and spiritual movements and Christian monasticism, in its particular characteristics, is part of this wider ancient phenomenon. John the Baptist himself was linked to such ascetic communities.

Early Christian monasticism in the East and the West sprang from the vitality of the local Churches. In the course of time, individuals responded to God’s call in particular distinctive ways, diverse ecclesial situations arose and, as a consequence, monasticism developed a rich and varied character :

The cenobitic life (from the Greek : koinos-bios, life in common) centered on the search for God in solitude. The eremitic life (from the Greek : erèmos, desert) in which the accent falls more on communal life. Two essential and complementary dimensions of Christian life, two forms of life closely linked which existed either in parallel or successively at different times.

Monastic tradition holds a special place for two monks who withdrew to the Egyptian deserts : Anthony and Pachomius. 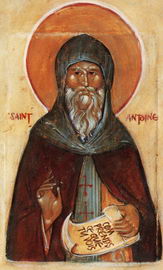 Anthony (251-356) is recognized as “the father of monasticism” symbolizing his paternity of solitary monastic life. 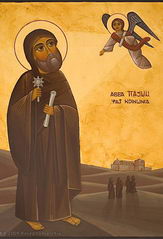 Pachomius is viewed, again symbolically, as the patron of monastic life in common. With the concourse of his sister Marie, he founded two monasteries for nuns.

These figures were not alone or the first in paving the way to Christian monasticism.

The word derives from the Greek : monos, which means alone. But the monk is alone as a consequence of his celibacy and the distance he chooses to take from the manifold attractions of his environment. More deeply, the term “alone” applies not only to someone’s exterior life but also to the inner person ; alone, in the sense of being unified, of having a single undivided purpose. The monk seeks to center his life upon Christ and thus advance upon a path towards interior unity which opens him to all men.

“The monk is someone whose eyes are fixed on God alone,
who desires God alone,
and wants to serve God alone, becoming a source of peace for others.”
(Theodore of Studion, 8th-9th c.).

Throughout the first centuries 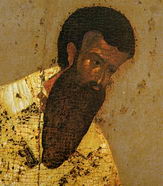 Basil of Caesarea (329-379), having widely travelled and observed many different forms of consecrated life, wrote a rule for the monastic life deeply imbued with the Gospel. With its balanced conception of life, this rule profoundly influenced monasticism in the East as in the West. Macrina, his sister, was the first to benefit from its wisdom, making it the rule of life for her monastery. 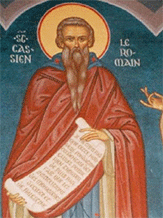 Cassian (360-435) wrote extensively upon the monasticism he had discovered in Egypt and founded a monastery of monks and possibly one of nuns in Marseilles. For him the ideal for the monk was to combine the qualities of the hermit and the cenobite. 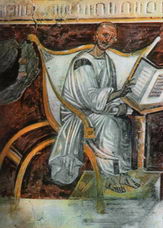 In Africa, Augustine of Hippo, underlined the value of community life, built upon mutual love, as in the first Christian community in Jerusalem. 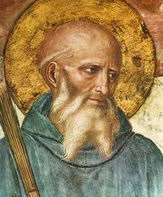 In the 5th century, Benedict of Nursia (490-547) “the patriarch of the Western monasticism”, after three years of solitary life, established himself at Monte Cassino. He founded there a monastery, intending it to be “a school for the service of God”. Scholastica, his beloved younger sister, a nun passionate about God, left a distinctly feminine impact on this life “hidden with Christ in God”. The Rule of St Benedict inspired by monastic writers from the East and the West came to have a major influence on the Western monasticism in subsequent centuries.

Like the monks, her brothers, the nun, “seeker of God”, stands in prayer face to face with Him, like a night-watchman guarding the world, awaiting the dawn, in imitation of Christ whom she wants to follow.

Life in the monastery rests upon five pillars :

Each Order is entrusted with an aspect of the Gospel which it is called to highlight… but the fundamentals are always the same.
So, like the shades of a palette, the monastic life and the Gospel have a thousand different colours.

Thus can be schematized :

What we have in common :

“We are women inhabited by a same desire,
a same passion, a same joy.”
(Poor Clares, Senlis)

Life in the monastery rests upon five pillars : 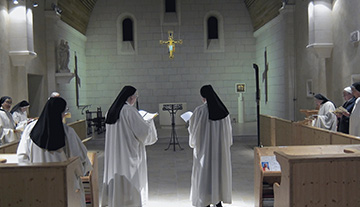 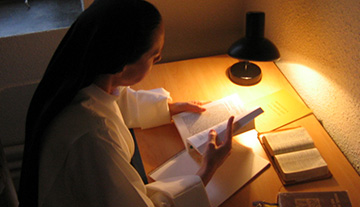 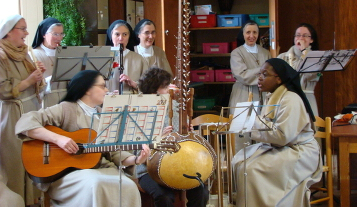 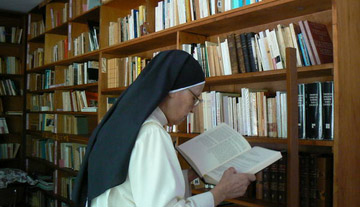 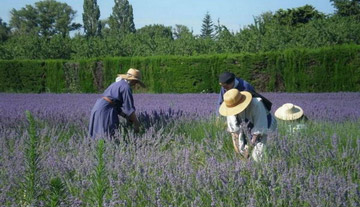