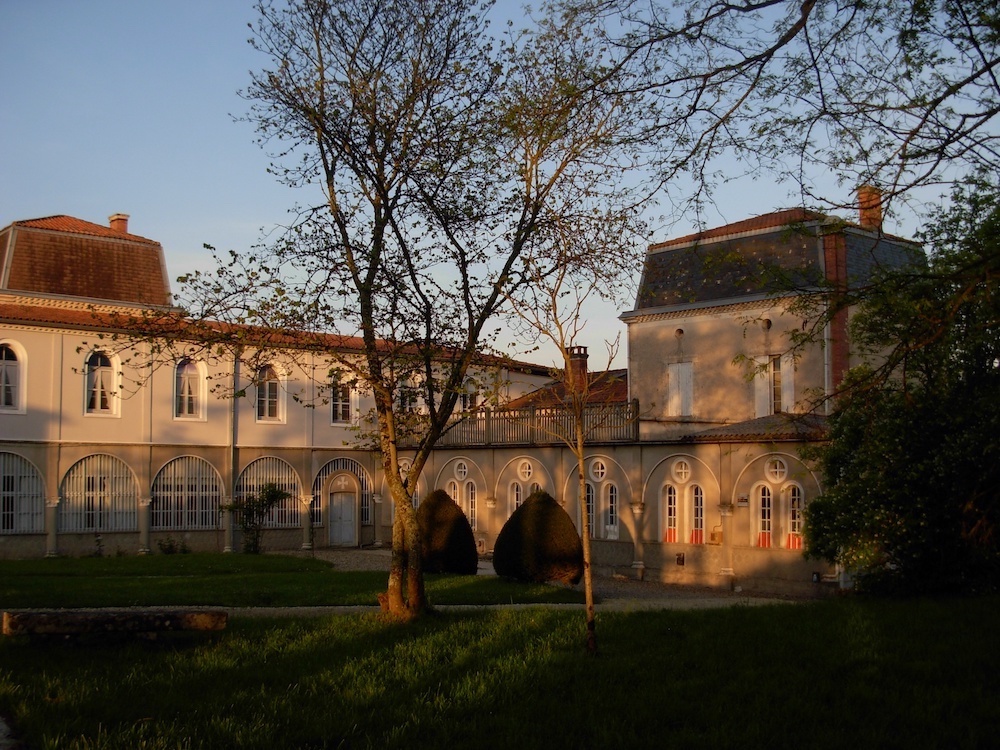 In 1358, Pierre de Galard, the Bishop of Condom, and Pope Innocent 6th, gave their authorization to allow the foundation of the Monastery St Clare in Nerac, the achievement of which is owed to Bernard, the Lord of Albret, and his spouse Mathé d’Armagnac, whose two daughters, Marguerite and Cise, were Poor Clare nuns.
At the turn of the Reformation, around 1560-1621, the monastery was destroyed. It was rebuilt, at the command of Louis XIIIth, by abbess Charlotte de Terraude (†1650), who “ruled it religiously for 40 years”, as her epitaph reads (see photo).
During the French Revolution, the community was scattered and the monastery, which was confiscated, became a hospital.
In 1935, the Poor Clares of Bordeaux-Talence sent a group of nuns to Nérac. The “Château du Pin” became progressively the “monastère du Pin”, under the vocable of Our Lady of the Sacred Heart. The older building was doubled by a construction which links it to a former barn which had become a chapel, while a former pigeon tower became an oratory available for visitors.

« Contemplative life is our first and fundamental apostolate, because in accordance with a particular design from God, it is our typical and characteristic mode of being in the Church living in the Church achieving communion in the Church accomplishing a mission in the Church.” (abstract from our Constitutions), a mission which, as from 1997, we have been living with the community of the La Roche-sur-Yon Poor Clares who had joined ours, and which we pursue presently in a sisterhood link with the Mbuji-Mayi Poor Clares in the Democratic Republic of Congo.
Our day begins with the prayer at 06:15 am, then, at 07:50, with Lauds and Tierce; ; 8:30 am : work ; 11:00 am : Mass followed by Sext ; None after lunch ; 5:50 pm : Vespers followed by the Adoration. We end our day with Complines at 8:30 pm, followed by the service of Readings and the goodnight salutation to the Holy Virgin !

Some outstanding facts regarding our monastery : the Relics of Blessed Marie Céline of the Presentation

In 2017, in the period following the closing of the Nieul Monastery, the Nerac Saint Clare Monastery welcomed the Relics of Blessed Sister Marie Céline of the Presentation who entered the Talence Saint Clare Monastery in 1896, was beatified in Bordeaux on September 16th 2007, and who certainly watched over our re-foundation. On the same day, at the same time, as the Nieul Poor Clares had the closing ceremony of their monastery, the Nérac Poor Clares were venerating the Relics of Blessed Marie Céline in the presence of the bishop of Agen. The photos from the community also show sister Marie Céline, her birth place, her resting place and her village church. For more information : http://bsemarieceline.canalblog.com 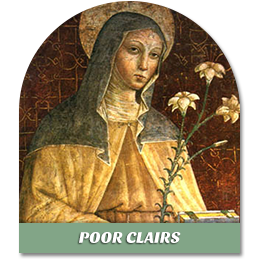 Monastery N-D of Thanksgiving in Castelnaudary

Monastery of St Clare at Crest

Monastery of the Poor Clairs in Lourdes

Monastery of Poor Clares at Millau

Monastery of St Clare at Nantes

Monastery of St Clare in Perpignan

Fraternity of St Clare at Riez

The Rameau of Sion at Saxon-Sion

Monastery of the Poor Clares at Senlis

Monastery of St Clare in Tours

Monastery of St Clare at Toulouse

Monastery of Poor Clairs at Voreppe