The history of our monastery

Our monastery was founded in Gagny, close to Paris in 1893.  During French Revolution, the community expatriate itself in Namur, Belgium.
In 1932, about thirty nuns, came back to establish themselves in Alsace in Landser, in a former capuchins convent  from 1659. Real estate later purchased by the redemptoristes in 1845.
The later sold the convent to their sisters upon return from exil. They stayed there until 2012, with an interruption between 1939 and 1945

Today, given the size of the buildings and the impossibility to upgrade them to the new european norms, as well as given the decrease of vocations, the community joined the congregation of the Sister du Très Saint Sauveur
We occupy the third floor of their mother house, still remaining in our monastic environment .
We share some liturgical celebrations, and benefit from their material  coverage.
In the redemptoristines monastery at Oberbronn, we are twelve  valid sisters plus one  handicapped sister. 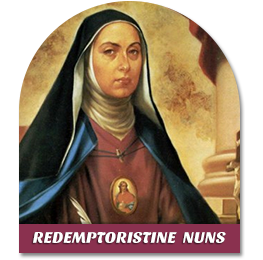