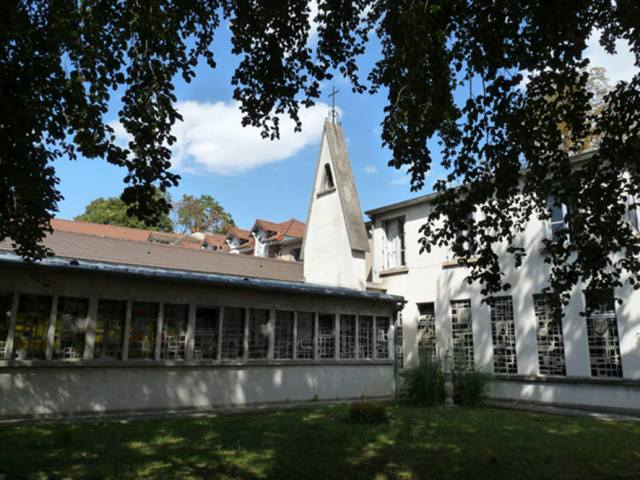 The Annonciades of Boulogne-sur-Mer, expelled by the French Revolution, re-established their monastery in 1818. Affected by the Combes laws, in 1904, they were exiled in England. In 1922 four nuns consolidated in France. After three years in Paris, they settled in Thiais in 1926. The monastery foundered three communities : Brucourt (1975), Peyruis (1980, transferred to Alajuela in Costa Rica, in 2007), Saint-Doulchard (1988), Menton (2000-2012). In 2009 four nuns carried to Grablin (Poland) the evangelic and marian charisma of the Annonciade.

The Annonciade monastery at Thiais comprises of 36 Sisters. Their day is divided between praising God, fraternal life and work. Laudes at 7h, followed by a time of Lectio divina, meditation and Mas ; 11.45 Office of the Day ; 13.45 Office of Readings ; 17.30 meditation and Vespers ; 21h Complies.

The monastery lives from artisanal products (biscuits, jams and stationery), accommodation of twenty rooms, offering a place of relaxation and spiritual reflection.

Well situated in the diocese of Créteil, priests and various groups from the diocese benefit from the reception facilities of the monastery.