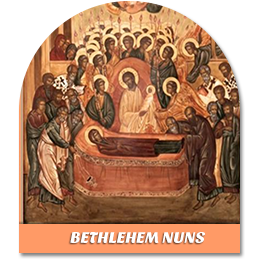 The vocation of these communities is to share the life of the Mother of God, present in the Trinity, in a life of adoration of the Father in Spirit and Truth. This vocation equally finds its roots in the tradition and wisdom of life of the “Lauras” of the deserts of the east in the 4th century, a tradition which was re-established by St Bruno in the west in the 11th century.

Following the holy monks, who, in the early Church, left for the deserts of Egypt and Palestine, with the Gospel close to their heart, the monks and nuns choose to forsake everything in order to gain Christ.

Their life in the desert is, in the first place, contemplation of the face of Jesus and the invisible and hidden Father, life drawn from the pure sources of the Gospel, in the school of the Virgin Mary, unceasingly renewed by the breath of the Holy Spirit. Following in the footsteps of Christ, it is also a life of interior combat against oneself and against evil, through the experience of one’s own precariousness, one’s faults, and one’s human and spiritual limitations.

That is why their life is characterized by silence, solitude, fraternal communion, continual prayer, the celebration of the liturgy and manual labour which reflects the beauty of the Creator.